Here's my contribution to Dan O'Shea's flash challenge. See my previous post for a link to all the stories. I can't wait to read them all. Here's mine and I hope you enjoy.

Mary Catherine needed to hurry. The morning was getting away from her and that wouldn't do. If she didn't get to St. Michael's before 8:45, she would miss confession with Father Mark. No. That wouldn't do. Not at all.

Mother had an odd look about her--not a peaceful one by any means. Mary Catherine figured it was because she had seen the knife coming. That was most unfortunate, but Mother did need to see a servant of God ready to smite her. She tucked Mother into her bed of sin, naked before God, both in this world and the next. Mary Catherine took a quick shower before she dressed for Church. Who knew a throat wound would bleed that much.

Father Mark was alone in the Church. All the older women in the parish arrived bright and early for confession and stayed on for the early Mass. No one went to confession before the 9:00 a.m. Mass anymore, and that was just fine with Mary Catherine. This morning, she wanted Father Mark all to herself.

"Bless me, Father, for I have sinned," she began. "It has been one day since my last confession."

The priest recognized the young girl's voice and bright red hair through the grating in the confessional. He smiled. These children. So devout.

"Is that you, Mary Catherine? Are you certain that you need to seek penance today, child? What could you possibly have done in one day that would necessitate your seeking absolution?"

"Well, the first thing this morning, I killed my mother," she responded. "And now, I'm going to kill you."

The priest couldn't believe what he was hearing.

"Uh--I--what did you say? My child, if you've done something ser..., I mean, perhaps the best thing for us to do would be to go now to my office where we can speak privately. If you're having some sort of episode..., or problem, well, I know that I can help you if you just trust me. Let's..."

The priest saw the barrel of the gun Mary Catherine was pointing at him through the grating.

"No, Father, we are not going anywhere. See, Mother and I were arguing again this morning. She drinks a lot, you see. Gets up every morning, and first thing, grabs a bottle. Oh, but I forgot. You already knew that, didn't you?"

He stopped when the girl began tapping the grating with the barrel of the gun again.

"Don't interrupt me. I'm trying to explain. Anyway, we started arguing, and I told her how much I hated her. I do, you know, and I tell her as often as I can. But, this morning, she surprised me and grew a backbone. She took a swing at me and told me she hated me too. She said she had always hated me and wished I had never even been born. She said when she found out she got knocked up, she wanted to get rid of me, but couldn't because of who my father was. Well, more to the point, because of what my father was."

The priest wondered if he could make it out of the confessional before the girl pulled the trigger. Even if he could though, he wondered, what then? What if he dove behind a pew? Would she fire anyway? Would she look for him in the pews?

"Are you listening? You look like you're in your own little world, Father. Just in case you're thinking of making a run for it, think again. There's only so far you can run, and I do mean to kill you today. So, just pay attention. I have many other things to do today, you know. You're not my only errand."

Errand? Is that what killing him was to her? An errand? My God, he thought, please let me get out of this somehow. Please let me find a way to reason with this disturbed child. Perhaps if I just try to remain calm, he thought, and try to keep her talking. Someone's bound to come into the Church and that surely will make her stop this insanity.

"What did you mean, what your father was? Please tell me."

"I will, if you would just shut the fuck up. Oh. I'll add a Hail Mary to my penance for that one. Anyway, Mother told me what and who my father was. She said he was a priest. Can you believe it? A priest. And she also said, you sick and wicked bastard, that the priest was you."

Oh God, no. Now, he wasn't sure keeping this child talking was such a good idea.

"You don't understand how things were, child. I was struggling with my faith, I was young, the times were different, I was confused and your mother..."

The gunshot echoed through the empty Church. Blood splattered all over the front of Mary Catherine's new Sunday dress. Who knew a headshot would bleed that much.

"Dear God," she whispered, "I beg for absolution for this and all my sins of today. I wonder what my penance should be. I'll decide then, shall I? Let's see. I've got it."

She put the gun back into her purse, straightened up on the kneeler, closed her eyes, clasped her hands and began.

There's a new flash fiction challenge that's got a real kick. Whatever crime or type of evil occurrence strikes your fancy is supposed to take place within your chosen place of worship. Freaky? You bet. Possibilities? About a million. I'm getting in on this one. I've already got the idea for my tale and it's a dark one, folks, a really dark one. But, come on. Is there any other kind? The participating authors are listed, along with a link to their blog, which is where the stories will be posted. The deadline is March 1, so mark your calendars. Scope that list of submitters. We are all going to be in for a real treat.

The Crime Factory is Open For Business!

This is a new zine that is a MUST read. It is also a MUST CONTINUE to read. The first issue is available now, and it's a crime fiction lover's dream. Essays, articles, reviews, short fiction, you name it--it's in there. Get over there now and start in on the first one. You wouldn't want to get behind... 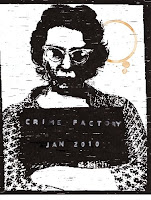