Keep Her Safe by Richard Parker - A Review 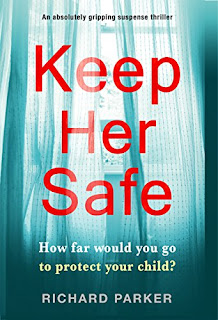 Maggie, a single mother with a young child, awakes one night to find an armed woman in her home. Maggie doesn’t know her, but she does know who sent her, and why. The young woman, Holly, has been instructed to kill Maggie in order to ensure the safe return of her baby. Maggie understands this woman’s deadly mission since she herself had been sent on an identical one. Someone who calls himself the Babysitter kidnaps the children of single mothers and instructs them to commit murder in order to get their children back unharmed. He even provides them with the names and locations of their intended targets.

Maggie’s daughter, Penny, was returned safe and sound, and she was not going to allow anyone to endanger her again. Holly’s daughter, Abigail, was now in the hands of this demented puppeteer, and she believed following his orders was the only way to get her child back. Two mothers confront each other in the middle of the night, each intent on protecting their children whatever the cost. Choices have to be made, and quickly too, because the Babysitter’s clock is ticking, and when the sun rises, time’s up. Will these two women play out his sick game, or is there any room for trust between them so together, they can confront this madman, and still save their children?

The author does not take you gently by the hand and lead you into a plot land of sunshine and roses, where together you, along with the characters, can slowly gather strength to face an upcoming crisis. No. Not this time. In this story, you are immediately set down right in the middle of a nightmare that you will share with two mothers fighting for their own lives and ultimately, the lives of their children. It is a unique format for a novel, and that is what makes this one a true thriller. Life doesn’t slowly build up with a lot of backstory – life simply happens without warning, and so do the events in Keep Her Safe.

The mothers’ journey in Keep Her Safe is one of twists and turns, with danger around each and every corner. You will understand their anger, you will sense their determination, and you will feel their fear. While it is true that you won’t be able to put this one down, you won’t want to either. Just like Maggie and Holly, you will need to know where the road leads, and in the end, who will win this deadly game.

You can get Keep Her Safe here

You can get Keep her Safe here
Posted by Joyce at 8:42 AM No comments: