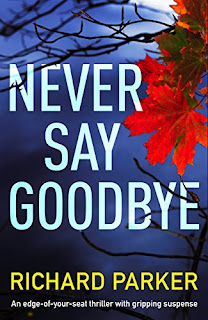 In Never Say Goodbye, Richard Parker introduces us to Detective Tom Fabian. Changes are taking place in his personal life that are presenting many challenges. He and his wife have decided to separate, and their daughter will be leaving home to attend college. His professional life is about to take a very dark turn due to a tragedy that occurred within his Department. He has been assigned the position of Lead Detective on a case involving multiple murders. There are no clues, no witnesses, no suspects, and the investigation is at a standstill.

His boss, DCI Metcalfe, expects progress, and insists Fabian stay away from the press on this one. Tom had previously been the Lead Detective, and driving force behind the apprehension of a serial killer. In that particular case, the press had been helpful with the capture. Tom became the face of the Department with the media, but Metcalfe mistrusted the press, and was determined that level of publicity for both Fabian and the Department should not occur with this case.

At the time Tom took over the lead position, there had already been four murders, with the victims being one man and three women. The murders occurred in different parts of the city, and no connection between the victims was apparent, except for the weapon and their manner of death. They were all stabbed with the same knife, and the killer inflicted post-mortem stab wounds to their faces. Was this an attempt by the killer to instill fear throughout the city? Was the killer trying to send some type of message?

Fabian eventually figures out what links the victims, and it is as disturbing as the crimes themselves. The victims’ last names are street names, and the sequence of their murders follows a particular route. Which street name will be next on the route, and without any clue as to direction, how can the police identify and protect any potential targets? What association does the killer have with these particular locations? Detective Tom Fabian is racing against a killer’s clock to an unknown destination. Who will cross the finish line first?

Never Say Goodbye pulls you in right from the very beginning. The plot is fast-paced, and filled with twists and turns, and the characters are genuine and engaging. Now that I have met Detective Tom Fabian, I can’t wait to tag along with him on his next case. This is Book #1 with this character, and it is a gem. I am really looking forward to Book #2, and then some. If you enjoy a dark crime thriller, Never Say Goodbye is definitely for you, and I recommend it very highly.

Never Say Goodbye will be available to order on August 14, 2018.

You can order it here

You can order it here