Roland of the High Crags by B. R. Stateham - A Review 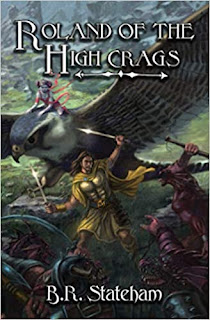 Roland of the High Crags. A Bretan monk. A warrior. A wizard. Once honored. Now, disgraced. An apostate. A traitor to his faith. Loathed and reviled. Yet, he continues with all that is in him to try to eradicate Evil from his world and all others. Evil taunts him, stalks him, and hunts him. Roland responds in kind, with all the cunning, strength, and determination he possesses. One wintry night at the Bretan Monastery, he is awakened from his sleep by a dreadful vision. The Fates were planning to task him with a sacred duty.

The First Clan – the Dragon Clan, has risen again, set on fulfilling their prophecy; that is, to destroy mankind, and any and all who stand in their way. The Abbot of the Bretan Monastery knows the First Clan’s army is close and that they plan to attack and destroy all within. He also knows Roland has the ability to find out how many have joined their deadly cause, as well as the First Clan’s strengths and weaknesses. Those at the Monastery must prepare to defend themselves and their holy sanctuary. Roland takes on this duty to seek out this ancient Evil.

On his journey, Roland sees the destruction that the Dragon Clan have left in their wake. His heart is heavy seeing the last castle of the Dragon Clan Anktooth overcome with flames, and bodies of the dead. He had tried to assist them in their fight, but the First Clan continued to prevail. Baron Anktooth summons Roland and entrusts him to protect his granddaughter, Ursala, who is a female dragon child and a Pearl Princess. He also asks Roland to help to raise an opposing army to help with the fight against the First Clan. Roland, the dragon child, and three others who join them on this quest, begin their journey.

Roland of the High Crags is a story about love and loss, joy and pain, trust and betrayal. Stateham’s vivid descriptions of characters, locations, and settings flood the senses. The smoke from the campfires stings your eyes, and fills them with tears. The cries and screams of the enslaved and tortured assault your ears. Your heart fills with joy and contentment while you enjoy the laughter of a child. You will accompany Roland and his party on their quest, and share their triumphs and their tragedies. Won’t you join them as they continue to try to rid all worlds of Evil? You can find them here. 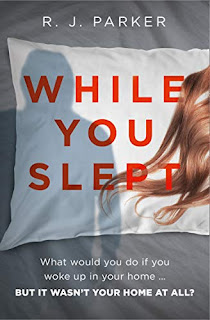 It was going to be just another ordinary day. Same old, same old, for Lily Russell, a recently divorced single mother with a young daughter named Maisie. Lily had custody of Maisie, and a restraining order against her ex-husband Ewan. She wanted their lives to go on - go on as smoothly and safely as possible. That goal was easily achieved by installing an alarm system complete with cameras around her home and property. The alarm system was also equipped with a speaker, which she planned to use to scare away a flock of pigeons that frequently congregated on her garden wall. The system was linked to her phone, and she would be alerted should anyone trespass. On this day, Maisie was at school and Lily was at work. Just another ordinary day. Ordinary, until the motion detector in her garden signaled an intruder. When she pulled up the image on her phone, her blood ran cold.
The camera showed a man standing in her garden, and he was wearing a cut-out mask of her daughter Maisie's face. She didn't know what to think, and activated the microphone and told the intruder to leave - to get off her property. She also told him that the police were on their way. He didn't move an inch, but simply waved to the camera. Her co-worker was calling the police, and while Lily watched, the intruder climbed over her garden wall and disappeared. Her daughter's face. He was wearing a mask in the image of her daughter's face. She immediately called her child's school to verify that the girl was still there and safe, and told the staff member that there was a family emergency and that she would be picking Maisie up right away. She hoped the police would be at her house when she and her daughter arrived home. What is happening? A mask of her daughter's face.
The police were there when Lily and Maisie arrived home, and the officer verified the house and property were safe. Remembering what she had seen, that was small comfort for Lily, but doors were locked, alarms were set, and after Maisie was tucked in for the night, she decided to have a glass of wine to relax before going to bed. When she awoke the next morning, she felt a bit ill. She reasoned that was likely due to the wine. While moving through the house however, she encountered locked doors. What was going on? She went to get her keys where she had left them the night before, but they were nowhere to be found. Her phone showed a missed call from an unknown number, and then rang again from that same number. When she answered it, a man asked her if she felt safe, told her to check her app, and then he hung up. The image in her phone was the man still wearing the mask of her daughter's face, and he was in her kitchen. He also had Lily's keys in his hand.
She's able to get into the kitchen, and he is gone, but so is reality. When she looks out the window, what she should have seen was her back yard and garden. What she saw instead was rubble and rocks from a demonished building, and it appeared that she was approximately 200 feet above the ground. She realizes that she and her daughter are in an exact replica of her home, right down to the cabinet and drawer contents. There is plenty of food and drink for them both, and duplicates of all their clothes. The only difference is that there is no way out. How is this possible? Who would do such a thing? She has no outgoing phone service, but her captor calls her to ask if she needs anything, yet yields no clues as to his purpose or identity.Lily and Maisie are now in the middle of a nightmare. All they can do now is eat, sleep, and try to stay alive. Lily must keep her child safe and calm, while trying to find a way out.
Does their captor watch them? Does he listen to them? Where exactly are they? Does her ex-husband have anything to do with this? If not, who would place her and her child in such a dangerous situation? Follow along with Lily and Maisie as they fight to survive through each day and night, not knowing who is behind this twisted scenario or most importantly, why this is happening. R. J. Parker delivers an intense thriller that will keep you guessing right up to the end, which is just as shocking as the start. This tale of fear, confusion, and desparation makes for great bedtime reading. Sleep tight...
While You Slept will be available July 24, 2020. You can get your copy here.
Posted by Joyce at 11:44 PM No comments: