Hide and Seek by Richard Parker - A Review 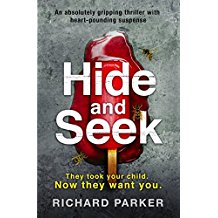 It’s a day, just like any other day.  Lana is washing dishes, and her four-year old son Cooper is out playing in the yard. She glances briefly out the window, and sees that a man wearing a mask has jumped over the fence into their yard. To her horror, he begins placing a sack over Cooper. She fights with him, and saves her son from his would-be abductor. Before he flees the scene, the man whispers ‘tomorrow’. While reporting the incident to the police, the child reveals that the man has been in close contact with him on previous occasions, whispering to him through the fence. Now this monster has a name: Mr. Whisper.

Lana, her husband Todd, and Cooper relocate, but Lana cannot move on. She becomes obsessed with finding Mr. Whisper, and follows a website that tracks child killers and pedophiles. The police continue to investigate the case without success. When they win a family vacation at an adventure park, it seems an opportunity to put the ordeal behind them, even for a short time. At the park however, Todd is assaulted, and Cooper is abducted. Now, the nightmare truly unfolds.

Someone begins luring Lana to crime sites, Todd disappears from the hospital he was admitted to following the assault, and Cooper is still missing. What does all this mean? Where is Todd, and what dark secret is he hiding from his wife? Did the stranger keep his promise of ‘tomorrow’, or is someone using the child’s abduction to get to Lana?

Hide and Seek is packed full of dark and disturbing surprises around every turn. A mother on a quest to find her son, a father whose night terrors drive him to take desperate measures, and a stranger pulling the strings like a diabolical puppeteer, drawing them in for his own demented purpose. The characters are well developed and genuine, the settings are menacing, and the fear is palpable. The plot moves at lightning speed as a mother races to save her son, all the while somehow knowing she’s the missing token in this cruel and depraved game.

Richard Parker has done it again with another top notch, five-star thriller. This story will grab hold of you right from the start. Clear your calendar before you open it to Page 1 because there’s no way you’ll be able to put it down until the end.

Infinite Darkness (The Edge: Volume 2) by Patrick Reuman - A Review 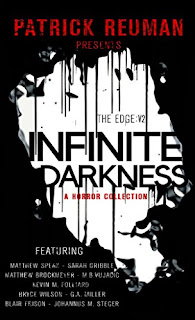 Infinite Darkness (The Edge: Volume 2), is a collection of horror stories you don’t want to miss out on. This anthology has no central theme, no min/max word count for the stories, and the stories are arranged in no discernible order. These are the reasons why it’s such an enjoyable read. None of the writers were trapped inside rule after rule, and were free to share their darkest, and most disturbing, tales of fear, superstition, and malice. There’s something in here for all dedicated fans of horror. It contains 17 stories, the works of 10 incredibly talented writers. These stories will shock, surprise, disturb, and scare you. If you are looking for a great read, I recommend this one highly.

You can get Infinite Darkness here
Posted by Joyce at 5:19 PM No comments:

Be My Killer by Richard Parker: Words CAN Hurt You! - A Review 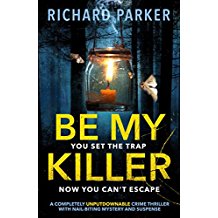 'Sticks and stones can break your bones, but words can never hurt you.' Really? Think again.

Let’s have some fun. Sign in to your Twitter account and access the hashtag BeMyKiller, a stream to entice a serial killer to select you as their next victim. There you will enter your tweet - your dare. Use your imagination – be creative – make him want you. Only. You. Wanna play?

A disturbing prank? An irresponsible practical joke? Perhaps, but as occurs after all actions, there occurs a reaction. In this case, the reactions that resulted were deadly consequences. People were being targeted, and murdered, in ways that matched quite literally the taunts they aimed at the killer. One victim baited the predator with the words ‘want a piece of me?’. You can probably make an accurate guess at how this young man’s life ended.

Hazel Salter, a film producer, had a theory about the killings, and also had a personal stake in this tragedy. One of the victims was a childhood friend of hers, and she was determined to try to find a way to convince the authorities to focus their investigation in a different direction. She gathers her crew together, and establishes a base of operations at the site of her friend’s death, with the goal of making a documentary about the murders. Plans include interviewing locals, family members and friends of victims, and members of law enforcement as possible.

Even someone with the best of intentions could not anticipate how their plans could go horribly wrong. As the project proceeds, people associated with it are systematically murdered. Who is responsible? How can those left protect themselves? Are the killings and disappearances related to the original Twitter prank, or has another serial killer chosen to use the area as his hunting ground?

Richard Parker has assembled a cast of characters whose lives criss-cross again and again, and weave an impenetrable web of mystery. From the first page, Be My Killer will lure you into that web, and hold you tightly until the last. Be My Killer is definitely not for the faint of heart, but if you’re looking for an impressively dark puzzle that gathers itself together, one terrifying piece after another, then Be My Killer is for you.

You can get Be My Killer from Amazon here:

You can get Be My Killer from Amazon UK here:

New Home for My Books

Severed my relationship with DiskUs Publishing, and all rights to my 9 books listed with them have reverted back to me. DiskUs has always dealt with me in an honest and fair fashion; however, exposure is very limited since books are only available via their site. Under new management, this may change in the future, but at this time, I prefer to find another home for my work. I am in the process of reworking several of my novels and will be seeking a new publisher for all of them, so stay tuned for updates!
Posted by Joyce at 8:12 AM No comments: