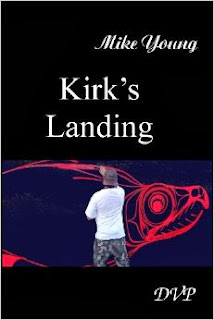 Question.  What is the critical attribute a law enforcement officer needs to successfully infiltrate a gang involved in criminal activities?  Why, of course, it is the ability to blend in; in fact, blend in so well the gang hardly notices you at all.  Corporal Dave Browne of the RCMP operates undercover in just such a role and his ability to ‘blend’ far surpasses that of his team members.  You see, Dave doesn’t simply blend in--he actually fades away--literally disappears and reappears at will.  Handy, huh?  You bet.  That is, until the one time during a ‘fade out’, he ‘fades in’ at quite the inappropriate moment.  Cover blown.  But, how?  Why?  No time to theorize and analyze.  If he expects to survive, time to get re-assigned.

His superiors relocate him to Kirk’s Landing, a town in Manitoba, to serve as Commander of the detachment.  A neutral enough position to bide his time until the fallout from his last assignment clears.  After all, it isn’t as if anything really serious was going to occur while he was there.  What could a sleepy little town’s crises amount to anyway?  A couple of domestic disputes, buddies scrapping with too much beer under their belts, kids playing their music too loud…  Just the usual small town stuff, right?

Dave discovers there is absolutely nothing ‘usual’ about Kirk’s Landing.  Behind those friendly smiles are dark and sinister secrets.  Everyone has a skeleton or two in their closet, and those bones are restless.  Dave was instructed to put in his time there and make no waves.  But, as the seemingly picture-perfect façade of Kirk’s Landing begins to crumble, Dave finds he cannot turn a blind eye to the shadows lurking around each and every corner.

A missing person’s case hangs over the town like a shroud.  Rumors abound concerning issues at the mill.  When Dave tours the facility, he is made to feel like an intruder, and the information he receives is vague and misdirected.  Is there a connection?  Did the missing man discover unethical or illegal goings-on and need to be silenced, or was it just another case of a hiker losing his way in a snowstorm?  Dave isn’t receiving a lot of input from the locals.  They need time to basically figure him out and determine whose side he’s on.  Is he there to help hold the community together, or is he just like all the others before him--there to simply help himself to whatever he can take from them.  And, as if all of that wasn’t enough for Dave to contend with, Evil itself decides to follow Dave to Kirk’s Landing, and threatens to permanently tear the community apart.

Kirk’s Landing has everything a story needs:  Three-dimensional characters, diverse cultures and customs, and enough twists and turns to keep your head spinning.  The puzzle is there, to be completed one piece at a time, chapter by chapter, page by page.  If you enjoy suspense, action, and mystery, along with a sneak peek into man’s dark side, you’ll love Kirk’s Landing.  Make sure you allow enough time to finish it once you start though.  There’s no putting this one down!

Kirk's Landing is now available on Amazon, and the link to purchase it is here.  I've made it nice and easy for you, so go ahead and order your copy.  You'll be SO glad you did.

The challenge this week, for Part Two, was to select one of the cliffhangers from last week (not your own, of course) and finish it.  The story I chose was called Hello World by Sam Barnett.  This was a story I felt needed to be continued, but actually ending it didn't seem right somehow.

Before you read Home, make sure you read Sam's story here.  It sets quite the impressive baseline for what follows.  Please enjoy.

Today is the one-year anniversary of that horrific, yet oddly liberating, event.  After the Enforcers had departed, I began to extricate myself from my mother’s body.  Like others of my kind, within moments of my birth, I was able to function independently.  Within 24 hours, I had achieved the appearance of an adult, and became able to move virtually unnoticed among them.

Inexplicably, I became aware that, upon my mother’s death, it was my obligation to consume her, but I could not defile that gentle soul.  I made the decision that my father, who had allowed the love of his life and his unborn child to be brutalized and left to die, should sustain me.  His flesh was bitter and without merit, but it would be weeks before I required another meal.

Through my interactions with the humans, I have discovered this species consists of not only the weak and the strong, but strangely, there are numerous variances between.  My kind is comprised solely of those who obey and those who enforce.  Having experienced the one and having inherited my father’s memories of the other, I can but only wonder which is most equitable.

Life thus far has been difficult, at best.  Locating nourishment, however, has never been an issue.  These creatures, these people, literally profess everywhere how much they care for one another.  They ‘love’ this scent, they ‘love’ the sound of that music, they ‘love’ to band together to protect and serve.  I find these proclamations quite amusing considering not one of them seems even slightly annoyed when their own begin to disappear.

Humans in towns appear to be more mindful as their numbers decrease, but not so in the cities.  As they are generally oblivious to those who no longer frequent their customary habitats, the same disinterest is demonstrated regarding any outsiders who replace the missing.  It is for this reason I have chosen these large regions in which to survive until…; well, since I know not what destiny awaits me, I simply go on.  Resigned to exist from sunrise to sunset--searching, and hoping.  That is, until I met Elise.

In this, my latest metropolitan refuge, I walk tree-lined paths that provide me with a pleasant sensation called ‘peace‘.  It is not a substance one can see or touch, but is a feeling that all is right and there is nothing to fear.  It is not often I am privileged with this intense calm, but strolling through this park is guaranteed to allow me to believe that, at least for the moment, I am safe.  Deep in the surrounding woods is also a ready supply of sustenance.  Some humans have no permanent structure to retreat to when their world goes dark, so they congregate in camps.  When necessary, I fetch one or two of the denizens to satisfy my hunger.  These camps constantly replenish themselves however, as, for every two I may take, at times, three or more replace them.  This practice also reinforces the hypocrisy of their kind.  When one or more go missing, those who remain confiscate and claim their meager belongings as their own.

It was on one of my treks along the trails when I passed a bench for resting.  It was there I saw her.  She was beautiful and delicate and her smile brought a warmth to me I had never experienced before.  Her skin was pale and smooth, and her dark eyes revealed many lifetimes.  I knew immediately she was not human, so I was as much filled with dread as fascination.  She held out her hand to me and her touch brought my father’s memories of love flooding in.  My future was with Elise, and the humanity within me pledged if we were to meet the same fate as my parents, I would not follow in the footsteps of my father.  I would not die on my knees.

We made a life together, and I was happier than I’d ever thought possible.  She never spoke of that other world, and I never asked.  She and I would sit comfortably together in silence for hours upon hours, and we shared our hopes and dreams for the bright future that lay ahead.

After a few months, Elise began to change.  She insisted on taking midnight walks alone and requested I leave our home for specific periods of time during the day.  I wondered if she was with child, but dare not ask.  I knew all would be revealed when the time was right.  One afternoon, I decided to surprise her with a snack and returned a half hour earlier than expected.  A young man from one of the camps had been killed by his comrades for his shoes; I simply took him out of everyone‘s way.

I was drawn to her voice.  She was in the bedroom, speaking into a transmitter I had never seen before.

“Target is ready to be terminated.  Come tonight when I am out.  He will be drugged and offer little resistance.”

Startled, she quickly tried to restore the connection.  I pulled the microphone from her hand and destroyed the unit.

“You are the child of a violator,” she explained, her tone devoid of emotion.  “My task is to locate and befriend such as you, then alert the Enforcers when the time is right.  You half-breeds tend to fight, so I introduce sedatives so the execution is effortless.”

I killed her quickly since time was precious.  She bled profusely as the blade caressed her throat.  I left her for others of our kind to dispose of.  I had no taste for betrayal.