The Good Neighbor by R. J. Parker - A Review 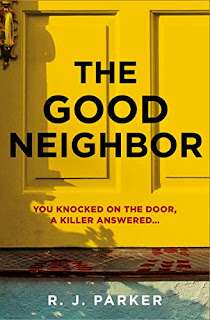 Residing in a small community creates its own atmosphere of comfort and security. Having neighbors makes each one of us feel as if we’re one part of thew hole picture of the neighborhood. We aren’t necessarily able to get to know all our neighbors, or perhaps, any, but the fact that they are nearby implies a safe haven in case those closest to us are not available in our time of need. That was how Leah Talbot felt one evening when she struck a deer on her way home. When she tried to get back on the road, her car ended up in a ditch. Unfortunately, her situation got even worse because her cell phone’s battery was dead, the night was cold and rainy, and her only option was to walk all the way to the village.

As she began her trek, she noticed a light on up ahead. She knew there was a house past the gate, but had never met the occupant. Certainly, whoever lived there would assist her; after all, that’s what neighbors do, right? She reached the house, knocked on the door, a man answered, and invited her in. He introduced himself as Martin Tate, and was very accommodating to Leah. He let her use his phone to try to reach her husband, and called a tow truck to help getting her car to the repair shop. The call to her husband went to voicemail, so she decided to go back to her car and wait for the tow. The driver would take her home. She thanked the man for his help, and left.

The next morning, Leah decided to visit Martin Tate to offer her thanks again, and give him a bottle of wine to show her appreciation. When she pulled up to the house, however, she saw crime scene tape and police cars. She was informed by law enforcement that the occupant of the house had been murdered. She was horrified that the gentle man who was so gracious the previous night had been killed. Confusion and fear overcame the horror when she was informed the victim was the sole occupant of the house – a woman. As disturbing as the situation had become, she realized last night’s encounter with Martin Tate was only the beginning when she received a text from him. Should she tell the police, or do a little investigating on her own? Was he a friend or a relative of the murdered woman, or was he the one who killed her?

Parker’s chapters are short, crisp, and fresh. You will never see what’s coming until you turn the page, and believe me, you will want to continue turning page after page. The Good Neighbor will keep you breathless from beginning to end, and even beyond. One important tip for you though: If you ever feel the need to knock on your neighbor’s door, make sure you know who is on the other side of that door. You can get The Good Neighbor here.