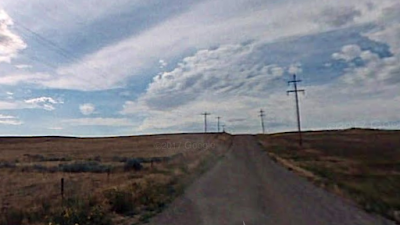 This week's prompt was to click on Random Street View to get a snapshot of a random place, and build our story around the view we get. This is the view I got, and it inspired me to look ahead at what could be, rather than at what was. My story is a bit over the 1,000 word mark. It's 1,106 actually, but I snipped it down as far as I could and I'm going to let it stand. I hope you enjoy it.

Where am I going? I can’t say. It isn’t that I don’t want to say, it’s that I don’t know. What’s more, I don’t care. As I look out my window, all I see are empty fields that border a long, and even emptier, road. This bus only goes by our farm every month or so – sometimes several months go by. There’s only one other farm out this way for miles besides Jack’s and mine, and somehow, Greyhound knows none of us are ever going anywhere, so why waste the gas? Today though, it not only came by, it stopped. The driver saw me running toward the road. I was still pretty close to the house, so I was lucky the driver saw me at all. I started waving my Bible – that’s all I was carrying, and he pulled over, and opened the door. I wanted to kiss him for it, but I didn’t. How could he possibly understand? How could he possibly know he saved me?

I knew how it would be from when I walked out of the church. Jack and me didn’t go for any honeymoon because Jack said that was a waste. Now that I was a wife, I didn’t need to be going on any fancy vacations where folks did for me. Now that I was a wife, it was me that should be doing. You may be asking yourself, why would you go along with an arrangement like that? I went along because that’s the way of the world; at least, that what I believed. Growing up, my mama did for my father each and every day until he buried her. Then, I did for him each and every day until Jack took me away from that life. Of course, my new life as a wife was to do for Jack each and every day until he buried me. If I ever had a daughter, then she would… See the problem?

It’s funny how we get caught up. Me, my mama, her mama before her, and her mama… You might be thinking I’ve just gone along and only woke up five minutes ago. No. I’ve been planning my escape for a long time, but my warden was always right with me. He was always watching, always checking, always… But, you know, there’s a few minutes each day where you’ve got a few seconds to yourself, and that’s all I needed. I was never allowed to leave the farm. It wasn’t my job to go to town. Jack went, and did the shopping, and sometimes, he’d have beers with his friends at the tavern. It wouldn’t have done me any good to go to town since I didn’t have any friends to go to a tavern with anyway.

Whenever he left, I’d go through everything to find the money he hid. He told me he had money, but I wasn’t supposed to touch it. ‘Supposed to’. I’m really hating those words now. Anyhow, I found where he hid it and took some. Not a lot. I didn’t want him to notice because my punishment would have been really bad. My daily punishment was bad, but not really bad. A few slaps, and sometimes, I got punched to the floor, but I always managed to get up. If I didn’t cry, he’d stop. That’s a good thing, right? Back to the money, I hid what I found in my Bible. I knew it was safe there because Jack wouldn’t put his hands on the Good Book. Personally, I believe if he did, he’d burst into flames. Ha! Oh no. Did Jack hear me laugh? I can’t let him hear… Wait. He’s back at the house, so HA! I’d better stop. The other folks on this bus are staring at the woman with the messy hair, bloody cheek, wearing a dress torn at the shoulder, carrying a Bible…

I’ve gone off the track, but I thought you needed some background. So, today? Jack went to town, so I was looking to take a bit more cash and then I’d be ready to find a way to leave. Turns out, Jack lied about going to town. I wasn’t paying attention – I slipped up, and he came in and caught me. I braced myself for a punch – that’s probably what I deserved for that, but he grabbed his shotgun and pointed it at me. He told me today was my last and pulled the trigger. That surprised me. If I got buried, who he’d get to feed the chickens, collect the eggs, cook his… I’m worrying about how Jack would get by after he buried me. See the problem?

The shotgun didn’t fire, and Jack started to cry. Cry. I felt bad for him. I almost went over and put my arms around him for comfort. I mean, that’s what I’m supposed to… No. What I was supposed to do was grab my Bible and run like Hell toward the road, and that’s what I did. Cars never come by out here, and town is miles away, but I figured I’d run until I dropped. If today was going to be my last, it would my last on my terms – not Jack’s. Like I said at the start, I saw the Greyhound and started waving. The driver stopped, I got on, paid to get to the terminal in the next county, and from there? I have no clue. I have no other clothes either. Or skills. Or friends. Or family… All I’ve got is me, my Bible, and a few more twenties. See the problem? Me either!