Flash Fiction Friday, Week 20: The Role of a Lifetime

This week, we’re touring the Night Gallery. The prompt was to select one of the displayed paintings and base our story on the image. The genre was supernatural horror. The one I selected is shown below, and I hope my story captures the true horror it offers. 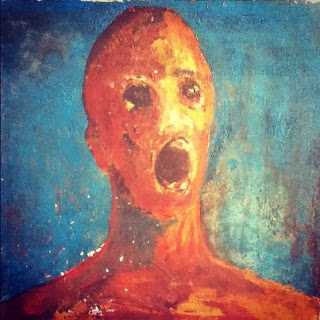 The Role of a Lifetime

I’m an idiot, and soon, I’ll be a dead idiot. This is what I get for trusting my so-called best friend and my so-called best wife. If they wanted to get rid of me, there are more humane methods. I’m probably partly responsible for the elaborate ruse they concocted to lure me to this island though. I am, if nothing else, predictable.

I’m a hospital orderly, and deal with the dead. It’s not a bad job and the money’s good. What I see all day long are white walls, white gowns, white floors, and the occasional blue tint on the lips of those who have passed on. As stimulating as this all sounds, it’s boring. That is why I seek my adventure in role playing activities.

I’m not talking about video games; although on occasion, I may dabble. What I love to do is role play as a re-enactor. I’m sure you’ve heard of those who re-enact the Civil War, or some other event from history. It’s great fun and very exciting. You get to dress up in period costumes and speak the language of the time, and all the while tourists mill around you, take your picture, and ask what your part was during the event.

My wife, Madge, thinks it’s a foolish waste of time and money, but as long as I’m able to send her to Florida every few months, she doesn’t complain too strenuously. To my surprise, she encouraged me to participate this time. Madge said Emery had told her of an event coming up, and she and Emery knew this would be an experience I would never forget. She was right as rain about that one.

“Dale,” Emery had approached me in the break room yesterday morning. “I’ve got a surprise for you. I’ve made all the arrangements. I spoke with Madge and she said you had no plans for this weekend while she’s off to Miami. There’s an island most have never heard of, that’s a couple of hours off the coast. Every month, they re-enact when an English sea captain was shipwrecked there and ended up bringing prosperity to their people when his countrymen rescued him. I don’t remember the whole story, but you’ll love it. During this month’s re-enactment, you will be their star performer.

“I have a friend who’ll fly you there in his private plane and drop you off on one of the beaches. You’ll make your way to the center of the island, find their village, and pretend to be shipwrecked. They’ll be cautious, but you’ll convince them you are a friend, and blah, blah, blah. There’s no script for this – you’ll just wing it. All the while, tourists will be watching from seats on a hillside. You’ll love it.”

I have to admit, the circumstances sounded rather unusual, but who knows? I’d be the headliner of this particular show, and that sat right with me. I couldn’t find that island on any map and wondered how Emery knew about this re-enactment activity. I made a mental note to ask him about that later. Madge took a taxi to the airport and Emery drove me to his friend’s airstrip. He had even brought a costume for me to change into before the flight, such that an English sea captain from a couple hundred years ago might have worn. Such a considerate bastard.

We took off right away, and during the flight, Emery’s friend informed me that I would have to jump from the plane onto the shore. After almost three hours, I saw the island and we flew in very low. The pilot opened a door on the side, lowered a ladder and told me to get out. He got as close as he could to the shore and told me to jump or he’d push me. At the time, I supposed it was better than being tossed overboard from a power boat.

I was grateful I didn’t sprain my ankle when I hit the ground. I ran into the water briefly so I would look to the tourists as if I’d crawled out of the ocean onto the shore after my ship sank. They love it when you keep it as realistic as possible. I didn’t see anywhere tourists could be observing from, and I figured maybe cameras were set up in some of the trees to capture it all. I made my way through the jungle trying to get to the village. Along the way, I practiced my British accent. I’d become quite adept at accents since my first re-enact event. I wondered what accent the natives would be using.

About a half hour in, I came to the edge of the village. I still saw no tourist seating. They keep them hidden from the action well. Some natives were cooking over a fire and others were weaving vines. How quaint. I ran into the center of it all and collapsed in front of the fire.

“Thank goodness I’ve found you,” I said, using my most royal-sounding dialect. “My ship sank, and all my crew lost. My Queen will send a ship after me and you receive a great reward for assisting me.”

Several of them ran over to me, pushed me to the ground and began kicking me. Emery said they would be cautious, not physically abusive. When do I get to explain that I’ve come in peace? They pulled me to my feet and dragged me to the front of the largest hut. A man I perceived to be the Chief came out. He really looked authentic with the great costume and all that makeup. His English was good though with not much of an accent. I guess some aren’t as into living their roles as I was.

“Another intruder,” he shouted. “Our homes will not be defiled by the unholy. Others have trespassed on our sacred land, and you will join them in the Cave of the Dark One. He will enter your soul and rid you of your evil and you will know his name forever.”

“No, wait,” I begged. They were twisting my arms painfully behind me. “I’m the shipwrecked captain. You’re supposed to save me. I…”

Leaves were stuffed into my mouth. They dragged me away from the village to the opening of a cave. A huge rock blocked it. Several of the natives moved it to the side and they pushed me in and quickly rolled the rock back. This was too much. I yelled for them to let me out, but the rock never moved. Something was very wrong. I was injured, and had scratches all over from being dragged. Emery and Madge wouldn’t have tricked me into coming here, would they? Is it possible this was really happening? Oh God.

The Chief said there had been others, and I can see several of them now. Mother of God, what happened to them? They’re no longer human, not in the sense that I still am. They are shaped as they were in life – a head, two arms, torso, two legs – the same, except they are no longer covered with skin. They are covered with a transparent shell, inside which fire burns. Their eyes are black hollows and their mouths locked forever in a silent scream. Please. Please don’t let them touch me. This wasn’t my idea. I never meant to desecrate your homes. If you let me go, I won’t come back. Plea…

What is that? There is a black mist making its way toward me. There is no wind here and yet, it is as if it is being driven by some force in my direction. This vile air is reshaping itself into a snake as it approaches. God, the smell. I am familiar with the scent of death and this goes far beyond. I stop screaming and close my mouth so I don’t taste the odor, but the mist comes over me and fills my nostrils. The pain is unbearable. I open my mouth to scream and it pushes its way in.

I back away against a wall and can go no further. I try to push it away, but my hands simply move through it. I can feel it making its way down my throat. How can this be? I can feel small fingers with sharp nails within this cloud of air grasping and pulling it through my mouth, down my throat, and into my body. It has become dark and I can no longer see. The flames have begun to consume me from the inside. I have become like the others.

This is my punishment. This is my Hell. I can no longer reason. I can only feel. The pain. The burning. Everywhere. Why? I’m not evil. I didn’t know. It was Emery and it was Madge. It wasn’t me. I was set up. Please listen. I’m sorry. So sorry. Merciful God, why…
Posted by Joyce at 1:54 PM