The Songbird Girls by Richard Parker - A Review 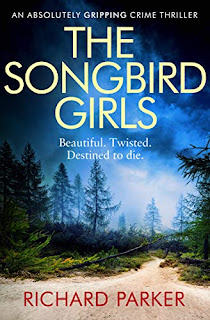 In Never Say Goodbye, Richard Parker introduced us to Detective Tom Fabian. Fabian is back in Book Two of the series called The Songbird Girls. Tom and his wife are still separated, but since he lived close to the home he had shared with his wife, he was able to spend time with their daughter who was still living with her mother. Recently however, his daughter had gone off to attend college and already had a young man in her life. Fabian’s personal life was changing dramatically yet again, but he could never have been prepared for the disturbing events about to unfold in his professional life.

Three years ago, Fabian had been the lead detective in a high-profile case involving a serial killer. Tom had been instrumental in his capture, conviction and imprisonment. There had been a great deal of press coverage about the case and the killer’s apprehension. The focus in the media had been primarily on Detective Fabian, much to the displeasure of Tom’s boss, DCI Metcalfe. Best to let sleeping dogs lie and move forward, right? New cases to investigate, new crimes to solve, and let the spotlight on one particular detective be turned off. As reasonable as all of that sounds, it was not going to happen, and the spotlight was about to shine more brightly than ever.

Word came down from the prison that Christopher Wisher, the killer who had murdered nine people, wanted to meet his nemesis Tom Fabian. DCI Metcalfe all but commanded Fabian to accommodate the killer’s request, and reluctantly, Tom agreed. Their meeting was unpleasant at best, but there was at least one interesting occurrence at the conclusion. Wisher presented Tom with his journal – a diary of sorts, filled with twisted cryptic statements. Were those daily entries insights into the dark memories of a sadistic sociopath, or were they clues predicting horrific events that will occur in the not too distant future? Can Fabian run the risk of an incorrect assumption?

A few days following their meeting, Wisher commits suicide in his cell, and Tom later learns the man was terminally ill. Perhaps the diary was the killer’s last attempt to get inside Fabian’s mind as revenge against his captor. This theory was quickly dismissed when bodies begin turning up with dead birds placed close to the victims. A dead songbird with its neck broken next to the victim was Christopher Wisher’s kill signature. Wisher was dead. Are these murders the work of a copycat killer? Not likely, since the presence of the dead birds was never released to the press. Could someone who dealt with Wisher during his incarceration have decided to continue the killer’s legacy, or had this deadly plan already been formulated by Wisher prior to his suicide?

Fabian knows he must investigate each one of Wisher’s contacts while he was imprisoned. It is a formidable task, but the clock is ticking. There is another killer out there, and no one knows who the potential victims are or when the killer will strike. Will Tom find the answer in time to prevent another life being taken, and should he look at those closest to the dead killer or at those closest to himself?

The Songbird Girls reads like riding on a runaway train heading toward a long dark tunnel. Is there light on the other side, or yet another longer and still darker tunnel? Richard Parker has presented us again with a crime thriller that will take your breath away from start to finish. The Songbird Girls will become available on December 19, 2018, so pre-order your copy now from one of the links below. If you haven’t read Book One of the Fabian series, Never Say Goodbye, make sure you order that too (links provided). I highly recommend both books in this series, and am anxiously awaiting Book Three.