Flash Fiction Friday, Week 2 - Is That You, Mom? 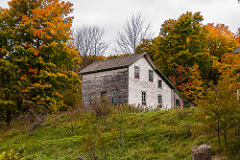 The prompt this week was to write a story based on a random image. I decided to use the first image that popped up on Flickr, as was suggested. The challenge included: 'What's is happening in the image? What happens next? Who is there, or not there? How does it make you feel?' My image brought back an idea I had awhile back for a story. It's time has come to be told.

Is That You, Mom?

Here at last. This place has obviously seen better days, as have I. I can’t recall any of my better days, but everyone has at least a few, right? It was a long drive and took a lifetime, but I was ready. Ready, and more than willing, to make it perfectly clear to her that my life thus far has consisted of a main course of anger and a desire for revenge, along with a small side order of pity. Not for me though. For her. It wasn’t easy, but I’ve tried during all of my 31 years to put myself in her place, and to try to understand why, at two months of age, I was considered disposable.

The streets can be ruthless and cruel, but they can also be kind and forgiving. Long story short, I was taken in by a minister and his wife, who gave me a home and an identity. I was able to get an education, job training, and through them, I met my current husband. Compatible? Not quite. I still needed an answer to the question that haunts me still. From her. None of my case workers or any of my various mommies and daddies would tell me a thing about my biological mother. They either didn’t know or didn’t care that I needed to know. My husband cared that I needed to know, and a very expensive PI and a few months brought me here to where it all began.

The court documents showed that the mother was 17 and unmarried at the time of the female child’s birth. ‘The mother’ and ‘the female child’. Cold perhaps, but life can be that too. The documents showed that ‘the mother’ voluntarily awarded custody of the ‘female child’ who had attained the age of two months. Through this process, ‘the mother’ relinquished all her parental rights. Done and done. ‘The mother’ lion walks away clean from the kill, and ‘the female child’ is thrown to the wolves. Today, however, 31 years later, prior to strolling into the lion’s den, I wanted to find out if there really were two sides to every story. To my story. The diner in town at the bottom of hill from her house seemed a good place to start.

“Yes, sweetie, Josie Milner still lives up on that hill. Has since she was born. Her parents died in a crash on Highway 9 many years ago, and left her that house and some money to get by. You remember, don’t you, Erma? When did the Milners pass on?”

“I sure do recall, Gracie. It wasn’t too long after Josie had that baby.”

They now had my full attention.

“That’s right. Josie got herself knocked up by one of those Wilson boys. Larry, it was, I think. All of them went and joined the Army – all five of them on the same day. Whichever one it was that got Josie pregnant left her behind.”

“Yeah, and Josie’s mama and daddy made her have that baby and care for it. After they passed though, Josie signed it over to the state, didn’t she?”

“Right quick too, as I recall. She started living the wild life then. I believe every man who passed through town spent the night in that house. So, honey, who did you say was asking after Josie?”

“A family friend.” My cover story.

“Well, you need to be careful, dear, because she’s a mean one. Ever since she got that sickness. She’s mostly blind from it and there’s not much left to her these days.”

Okay. There were two sides to my story, and they were both the same. There was no ‘I tried to take care of my baby, but couldn’t do it on my own’ or ‘my parents made me give up my baby or they’d kick me out’. There was only ‘get it away from me’. I needed a refund for my small side order of pity.

I thanked Erma and Gracie, left my car by the diner, and walked up the hill. ‘The mother’ was outside, poking with her cane at a dried-up tomato plant in an untidy garden next to the house. I stepped on a branch and it snapped. She turned to face the sound, her cloudy eyes looking past me. I could see the disease had left her with oozing sores on her face and hands. She was so small and frail, a sneeze would have put her traction.

“Who’s there?” she said, pointing her cane in my direction. Her voice was weak and raspy. “Go away. I got a gun in my house.”

“I’m sorry,” I said softly. “I was given the wrong address. I’m sorry to have bothered you.”

She turned back to the garden and continued to jab at the plant. I returned to my car. Time to go home. Time to begin living for me.